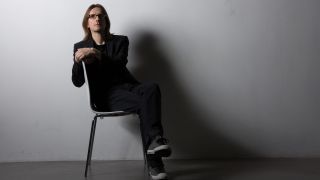 With a Top 20 album, two sold-out Royal Albert Hall shows and a run of January 2016 dates confirmed, life must be good?

It’s been a long, hard road but I’m proud of what we’ve achieved, especially with a style of music that lies outside of mainstream popular culture.

Why did you choose comedian Matt Berry and his band The Maypoles as support for the second of those Albert Hall gigs?

I’m a massive fan. Matt’s show Toast Of London was a big favourite on our tour bus, but then I heard his music and realised it isn’t dissimilar to what I’m doing. So this is a great chance to hang out with him.

Who opens on the first night?

Nobody. It’ll be a slightly longer show featuring songs I haven’t played much recently and with a few special, secret guests.

With Guthrie Govan and Marco Minnemann leaving for their band The Aristocrats, how are newcomers Dave Kilminster and Craig Blundell fitting in?

Amazingly well. Guthrie and Marco are superstar musicians, and it’s always hard to hang on to guys that are so in-demand. But in my solo work I’ve been very fortunate to work with world-class players, and David and Craig continue that trend.

As an advocate of vinyl, you must be thrilled to release the three-sided catalogue sampler LP Transience?

In all honesty, it wasn’t my idea! [Laughs] I was reminded that for someone who’s made fifty or sixty records, there were only a couple of compilations. I thought it would be nice to have a collection of shorter, possibly overlooked songs, because Postcard [from Grace For Drowning] or Drive Home [from The Raven That Refused To Sing] are among my proudest moments.

Your recent Los Angeles date was streamed live on the web. Could watching a concert from one’s living room sofa be the future of live music?

God, I hope not. There’s nothing quite like being at a concert hall and immersing oneself totally in a rock show.