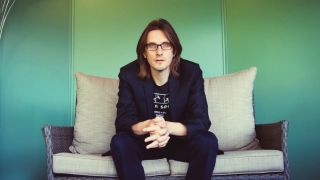 Steven Wilson believes the album format will survive – and the success of his latest album Hand. Cannot. Erase. has fuelled his confidence.

It tells the story of a character who vanishes into the social gaps of modern society, based on the real-life experiences of Joyce Carol Vincent, whose body was found two years after she died in her London flat.

And its sales figures lead him to believe people want to immerse themselves in heavy concepts.

Wilson tells One On One With Mitch Lafon: “If you’d asked me five years ago I would have been more negative. I’m cautiously optimistic.

“The fact that this album has been by far the most successful of my career, while being the most concept-driven thing I’ve ever done, makes me think things aren’t that bad.”

He adds: “Every time there’s a big swing in a particular direction there’s always a swing back. What we’re seeing right now is a world of streaming, where there’s a juke-box mentality and you follow the links from one song to another.

“At the same time there are a lot of people who have revelled against that and they’re getting back into the art of album listening.”

His opinion is informed by talking to a wide range of people, including younger fans. He reports: “They’re completely embracing the idea of the album as an art form, as a story-telling device, and embracing the album as analogous with going to see a movie or reading a book.”

Wilson reflects: “I’m not naive enough to believe the album will ever be as culturally significant as it was in the 60s, 70s or even the 90s. But I do see a healthy swing back.”