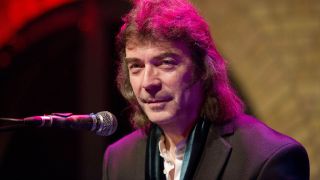 Steve Hackett is to discuss his 40-year career at an event in Leicester next month.

In Conversation With Steve Hackett will be staged at the city’s Sue Townsend Theatre on March 4 as part of this year’s De Montford University’s Cultural Exchanges Festival.

The former Genesis man will take part in a one-on-one interview with local film-maker and academic Paul Gosling of Crooked Hand Productions. The pair have collaborated in the past, most recently on the video for the guitarist’s track Love Song To A Vampire from his 2015 Wolflight album.

“We’re busy preparing some previously unseen video footage to screen as part of the evening and rehearsing with students from the BA Hons Dance course, who will be performing to Corycian Fire from Steve’s latest album. It will be a unique experience.”

Following the interview, Hackett will take part in a Q&A session with audience members.

Tickets for In Conversation With Steve Hackett are available via Ticketsource.

Hackett will embark on the North American leg of his Acolyte To Wolflight Plus Genesis Revisited tour at the end of March. He’ll then head to Japan before returning to the UK for an appearance at the TeamRock-sponsored Stone Free festival, London on June 19.