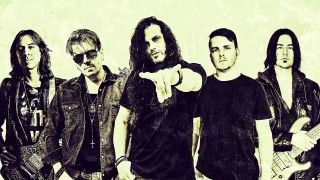 Soto have released a video for their new single HyperMania.

It’s the opening track on their upcoming album Origami, which is set to arrive this coming Friday (May 24) via InsideOut Music.

Sons Of Apollo vocalist Jeff Scott Soto and his band previously released a stream of the single BeLie back in March.

Speaking about the promo, Soto says: “HyperMania is the first music video from Origami. There is a double entendre to the lyrics that actually became a triple one for the video itself. It will be fun to see how it is interpreted by viewers!

InsideOut Music have also released a clip introducing the band and how they created Origami. Both videos can be watched below.

Origami will be released as a limited edition digipak CD which will contain the bonus track KMAG and three stickers, 180g vinyl and on digital and streaming platforms.

Soto: Origami
The Sons Of Apollo vocalist Jeff Scott Soto will release his new album Origami in May via InsideOut Music. The record will feature the lead single BeLie.View Deal