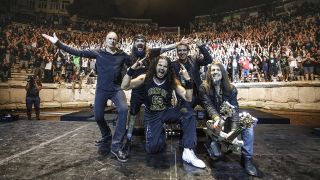 Sons Of Apollo have announced a North American tour for early next year.

The run of 13 shows will kick off at The Glass House in Pomona, California, on January 24 and wrap up with Mike Portnoy, Derek Sherinian, Billy Sheehan, Jeff Scott Soto and Ron ‘Bumblefoot’ Thal playing at the Bergen Performing Arts Center, Englewood, New Jersey, on February 8.

The band have also announced that they’ll be joined on the tour by special guest Tony MacAlpine.

The news comes just days after the band released a live video showcasing their track Labyrinth, which will feature on Live With The Plovdiv Psychotic Symphony which is out on August 30 through InsideOut Music.

It was recorded at the Bulgarian city’s Ancient Roman Theatre in 2018 and will launch on limited deluxe 3CD/DVD/Blu-ray Artbook, Special Edition 3CD/DVD Digipak, as a standalone Blu-ray and on digital and streaming platforms.