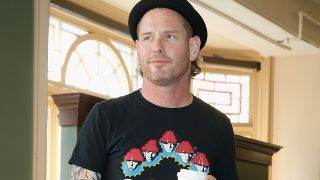 Corey Taylor has been busy filming a video for an upcoming solo single.

The Slipknot and Stone Sour frontman checked in from the set holding a championship belt, and although he mentioned the name of the song, that part was bleeped out, leaving us all desperately trying to lip-read – although he did use the hashtag #CMFT.

Taylor revealed back in May that he had finished recording his debut solo album, telling Lzzy Hale’s Raise Your Horns podcast that he had “secretly” recorded the untitled album with members of his solo touring band, including guitarists Zach Throne and Christian Martucci, bassist Jason Christopher and drummer Dustin Schoenhofer.

He said: “All five of us did it. We went in and we recorded 25 songs in about two and a half weeks, and we did everything live. And it's dope – really, really cool. All the songs are things that I've written over the years but they didn't really fit with either band. So it's stuff that I've just kind of been sitting on.

Slipknot recently celebrated the 21st anniversary of their self-titled debut album with a live broadcast of their home movie collection, Welcome To Our Neighbourhood.