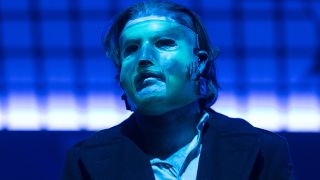 Corey Taylor has revealed his favourite Slipknot track of all time.

The vocalist has given an interview to the band’s Knotfest website where he looks back at the impact Slipknot’s self-titled debut album had when it was released in June 1999.

Asked what his favourite song is from the record, Taylor says: “My favourite by far is Scissors. To this day it’s my favourite Slipknot song.

“I love it because every time we would play it, the whole second half was improvised. We played at each other, free form, free prose, everything. It was violent and gorgeous.

“Nothing will ever replace it for me – when we stopped playing it live, I had a hard time enjoying our sets for a very long time.”

Taylor was also asked about hidden lyrical references on their 21 year old album, to which he replies: “I’ve always loved the lyrics for Eyeless. I’d never written anything as raw and open before.

“It was all about the absence of my father, being a teenage addict and also being forced to enter NA and Alateen when I was still fucked up. In treatment, they kept telling me, ‘It’s all in your head.’ That line resonates with me to this day.”

Slipknot celebrated the 21st anniversary of the album with a live broadcast of their home movie collection, Welcome To Our Neighbourhood.

And last week, former Slipknot drummer Joey Jordison spoke about the record, saying: “That album was and will always be some of the absolute best memories of my life.”