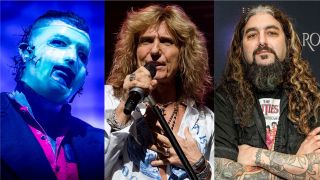 Slipknot, Whitesnake, Sons Of Apollo and Michael Schenker Fest have become the latest bands to cancel touring plans due to the coronavirus outbreak.

Slipknot have pulled the plug on their Asian tour, including Knotfest Japan, which was due to take place on March 20 and 21.

Slipknot say in a statement: “In light of global health concerns,  Slipknot have decided to postpone their upcoming Asian tour, including Knotfest Japan.

“While decisions like this are not easy, the safety and wellbeing of the band’s fans always comes first. Furthermore in this case,  the bands and artists, crew  and local employees are also equally affected, and as such, this was the only responsible decision that could be made.

“Slipknot and Knotfest will both return to Asia very soon, and at such time that everyone can be ensured of the best experience possible.”

Whitesnake, who were due to tour in Japan this month, have also postponed their live shows, but say they are currently working on rescheduling the affected shows.

The band say: “We deeply apologise to all parties concerned, especially those customers who bought tickets and have been looking forward to the Whitesnake shows.”

The band say: “Sons Of Apollo are absolutely devastated to announce that we have no choice but to stop our currently ongoing tour in Europe, Russia and Ukraine and postpone the remaining concerts.

“The coronavirus epidemic has escalated to a point where governments have decided to shut down venues, restrict events, limit flight destinations, with no certainty for us and our promoting partners and that our shows can be guaranteed to happen.

“Obviously these European wide emergency precautions have been taken to protect the safety and health of all fans in attendance and artists and crew alike. We do agree that this is a time where health comes first and we will not endanger band and crew, nor fans.

“Furthermore, on top of the potential health implications and obstacles, the economical impact and potential financial risk for a tour from overseas like ours has forced us, to take action to limit the possibility of devastating financial losses in such a force majeure situation.

“Nobody is more disappointed then we are in this moment...

“We are really looking forward to playing each and every show once the situation has cleared, as the momentum and excitement we experienced at our two sold out opening nights in Germany and our shows in Norway and Sweden have been by far the best the band has ever experienced!”

Sons Of Apollo insist that the affected dates will be rescheduled as soon as possible.

Michael Schenker Fest were also due to play in Japan, but have changed their plans in light of the coronavirus outbreak.

Schenker tells fans: “It’s with great sadness that we have to cancel the Michael Schenker Fest tour in Japan due to the spread of the coronavirus. You’ll be able to claim a refund for your tickets, Stay safe and sorry for the disappointment.”

Earlier this week, Lacuna Coil canceled a number of shows due the outbreak of the flu-like virus – also known as COVID-19 – in their home region of Lombardy in the north of Italy.

The news came just days after Testament, Exodus and Death Angel were forced to pull the plug on their planned show at Milan’s Trezzo Live Club, after Italian authorities cancelled all public events in the area as a precautionary measure against the spread of the virus.

And last week, Green Day also put the brakes on their planned Asian tour, saying: “We know it sucks, as we were looking forward to seeing you all. But hold on to your tickets, we’ll be announcing the new dates very soon.”

The World Health Organisation have posted public advice in light of the spread of the virus which covers basic protective measures against coronavirus.

Dear fansIt’s with great sadness that we have to cancel the Michael Schenker Fest tour in Japan due to the spread of the Corona Virus.You’ll be able to claim a refund for your tickets, Stay safe and sorry for the disappointment.Michael Schenker FestMarch 4, 2020