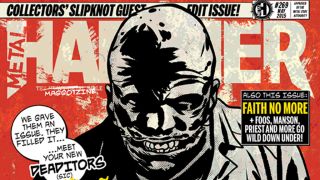 Slipknot’s Corey Taylor has taken over the new issue of Metal Hammer as Editor and he’s enlisted the Walking Dead’s Charlie Adlard to help him!

The Slipknot frontman is now in charge and he’s brought a load of the Knot with him to help out, including Chris Fehn who reveals why he loves Venom and Mick Thomson who goes through his Discs Of Doom – from Electric Six to Deicide.

But that’s not all, Charlie Adlard – acclaimed illustrator from the Walking Dead comics – has designed our special gatefold front cover with EXCLUSIVE artwork of every member of Slipknot. Trust us, it looks badass.

We also step inside the studio with Bullet For My Valentine as they work on their new album, we go snowboarding with Chris Broderick and Gene Simmons gives us the ultimate A-Z of Kiss!

Plus we chat to Danny Worsnop about life after Asking Alexandria with We Are Harlot, we celebrate ten years of Trivium’s breakthrough album Ascendancy and Stick To Your Guns reveal why they’re the thinking man’s punks.

And we’ve got LOADS more from Halestorm, Moonspell, Ranger and Chunk! No, Captain Chunk.

Head down the shops to pick up your copy now!

You can also download it for iPad or read it on TeamRock+.