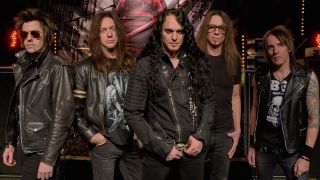 Skid Row have announced a UK tour which will take place later this year.

The band have lined up a total of eight shows, kicking off at Ayrshire’s Winterstorm Fest on November 29 and wrapping up at The Mill in Birmingham on December 8.

Skid Row will be joined on the road by special guest The Quireboys, Crashdiet, Hollowstar and Matt Mitchell & The Cold Hearts on select dates.

Guitarist Dave ‘The Snake’ Sabo has reflected on the band’s longevity, saying: “I will always be that 16-year-old kid in front of the mirror, pretending to be Ace Frehley or Michael Schenker.

“It’s still about writing a great song with your friends, praying it connects with someone. That has never left me. That willfulness will always exist, and there’s so much left to say!”

Tickets for the tour will go on general sale from 9am on Wednesday (June 19).

Last month, Skid Row signed a deal with Golden Robot Records for the final instalment of their United World Rebellion trilogy which will be released later this year on a date still to be confirmed.