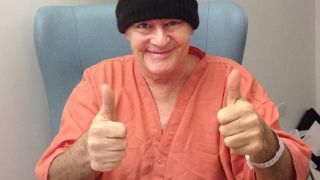 He was diagnosed with an aneurysm after collapsing during the band’s winter UK tour. He underwent two procedures after the first failed to fully address the problem.

Glockler’s wife Gina tells Classic Rock: “A 100% recovery is expected. He’ll be back to play on the album when Saxon start work later this year, and he’ll play all future dates excluding the ones next month. Thank you all for your support!”

The NWOBHM icons yesterday confirmed that Sven Dirkschneider – son of former Accept singer Udo – will play drums during the band’s February shows, which were rescheduled as a result of Glockler’s illness.

But the veteran sticksman will be at every show to meet and greet fans: