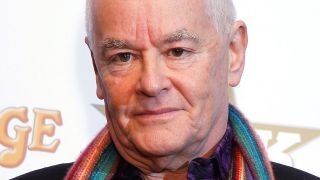 Saxon have postponed the remainder of their UK tour after drummer Nigel Glockler was rushed to hospital.

The NWOBHM icons were due to play five more shows on their 35th anniversary Warriors Of The Road tour, but have had to reschedule those dates after Glockler took unwell on Monday night.

Shows in Newcastle, Nottingham, Wolverhampton, Oxford and London have been affected, with new dates announced for February next year.

No further details of Glockler’s condition have been revealed, but the band say they will update fans as soon as they can.

Singer Biff Byford says: “Devastating news that our friend and drummer Nigel has been taken ill. We have to postpone all shows until we find out more. He has been taken to hospital in Newcastle. All our thoughts are with Nigel and his family.”

The UK dates were due to be the culmination of a 38-date European tour featuring songs from the band’s ‘Holy Trinity’ of albums – Wheels Of Steel, Strong Arm Of The Law and Denim And Leather.