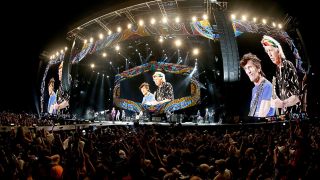 The Rolling Stones are to release a live package showcasing their historic live set in Havana, Cuba, later this year.

The veteran rock outfit performed in front of 1.2 million fans there in March – setting the record as the first open-air concert in the country to feature a UK rock band.

The film hit cinemas for one night only last week – and now fans will get the chance to own the package when Havana Moon is released on on DVD, Blu-ray, DVD/2CD, DVD/3LP, Digital Video, Digital Audio plus special Deluxe Edition on November 11.

The film was directed by Paul Dugdale and recorded at the end of the band’s America Latina Ole Tour.

A statement reads: “As the Stones took to the stage under a perfect Havana Moon for a show that will forever go down in history books as a life-changing moment for a country on the brink of change, there was nothing that was going to come between the band and their fans including the Vatican in Rome who had objected to rock’n’roll in Havana on Good Friday.”

Pre-orders for the live package are now open, with the Deluxe Edition containing the DVD, Blu-ray along with 2CDs in a 60 page hardback photobook.

Watch a video trailer below.