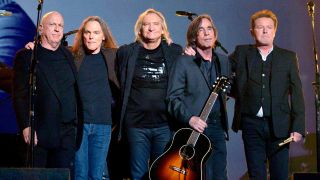 Don Henley says there’s a chance the Eagles could return, with Glenn Frey’s son Deacon in his late father’s place.

Co-founder Frey died in January at the age of 67 of intestinal disease.

The band performed a tribute at this year’s Grammy awards ceremony, with guest performer Jackson Browne, and Henley later described it as “the final farewell.”

Asked about the Eagles playing again, he tells the Montreal Gazette: “At some point in the future we might work our way around to that.

“Glenn has a son who can sing and play quite well. One of the only things that would make sense to me is if it were his son.

“With Jackson we could do Take It Easy and a couple of other things. But the only way I’d consider any kind of reunion, I think, would be with Glenn’s son Deacon.”

He continues: “There have been no discussions along those lines. We’re still going through the healing process – trying to get through all this.

“Those are things that might happen somewhere down the road, but right now everybody’s doing the solo thing.”

While Joe Walsh tours with Bad Company and gears up to appear at this year’s Classic Rock awards in Japan, Timothy B Schmit released solo album Leap Of Faith last week. Henley is planning his own next release, which will follow last year’s Cass County.

“I want to start on the other album sometime later this year or early next year,” he reports. “I can’t afford to wait.

“I’ve finally figured out that I don’t have the luxury of diddling around anymore – I’ve got to get on it.

“I have some regret that I didn’t produce more work in the past, solo work. But on the other hand, when I tally it all up with the Eagles catalogue and my solo catalogue, there are a lot of songs there, you know?”

Glenn Frey: a life lived in the fast lane

Don Henley: "You can't be a pushover or a pansy"