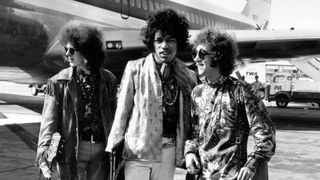 On September 23rd, 1966, Jimi Hendrix borrowed $40 and boarded a plane to London, another musician trying to make a name for himself. He launched into a hectic schedule, performing with the house band at Scotch Of St James, a club popular with musicians, the day after he arrived.

Jimi remained based in the capital until June 1967, playing shows, making records and blowing minds. He returned to the US a hero, the man who confronted the British blues boom in its own back yard and emerged victorious. Here’s what the people who met him thought…

When I saw Jimi we knew he was going to be trouble. And by ‘we’ I mean me and Eric [Clapton], because Jimmy [Page] wasn’t in the frame at that point. I saw him at one of his earliest performances in Britain, and it was quite devastating. He did all the dirty tricks – setting fire to his guitar, doing swoops up and down his neck, all the great showmanship to put the final nail in our coffin. I had the same temperament as Hendrix in terms of ‘I’ll kill you’, but he did in such a good package with beautiful songs.

I don’t want to say that I knew him well, I don’t think anybody did, but there was a period in London when I went to visit him quite few times. He invited me down to Olympic studios and I gave him a bottleneck. That’s what he plays on Axis: Bold As Love.

In real life, Hendrix was nothing like the wild guy that he portrayed on stage. He was a quiet, introverted guy, like Ray was. He was explosive on stage, but very softly spoken off it. I’d see him from time to time at the Scotch of St James or at parties. We used to exchange the odd word to each other, but it was never like we were close. I remember once sitting next to him on a plane bound for Stockholm. After a while we got talking a little and he suddenly said to me: “Y’know, that guitar riff you did on You Really Got Me was a real landmark.” You can imagine how I felt. To be endorsed by Hendrix was really something. It was a great compliment.

In about 1968 I had been doing pretty well with a band in Cardiff, and I was a motor mechanic. I decided to hand in my notice and to seek my fame and fortune in London. So I moved up and got a little poky flat somewhere.

The places to go then were Giovanni’s in Denmark Street, where all the musos would hang out, and The Ship, a pub in Wardour Street. I went to The Ship one night, and it just so happened that Jimi Hendrix was playing at the Marquee down the road. All I knew about him was that I’d heard the record Hey Joe and that there was a buzz going round. So I was in The Ship with a friend from Cardiff, and Jimi walked in with a couple of guys and stood next to me at the bar, and we got talking.

He asked me if I liked Eric Clapton and I said: “Oh yeah. But I’m into Steve Cropper and the MGs.” Which he seemed quite impressed with because that Stax thing was still a bit underground. We had a pint, and what struck me was that I’d never met anyone so opposite to their image; he was charming, polite and quite a gentleman. And that impression stuck with me.

We were playing Regents Polytechnic, just having a pre-gig pint in a pub across the road and in comes this guy who turns out to be Jimi Hendrix. Now, we had already heard about Jimi on the grapevine.

Jimi came up to me and said: “Hi. I would like to sit in with the band.” I said it was fine with me but he’d obviously have to check it out with Eric and Ginger. So we went across to the gig, and Eric immediately said yes and Ginger said: “Oh, dunno about that” [laughs]. So he came on and plugged into my bass amp, and as far as I can remember he just blew us all away.

Jimi actually came to one of Fleetwood Mac’s first rehearsals in London, because I’m sure he’d heard about Peter Green. He came down with producer Mike Vernon to the funny little club where we rehearsed, and I remember he was very shy, a lot like Brian Jones in many ways. Shy but suddenly bigger than life. Which is often the way with shy people. Here was this guy who’d been saying ‘yes sir, no sir’ to us, and then you’d see him on stage and he’s eating half a Marshall amplifier..

I saw him at [London club] the Bag O’Nails. Everyone was there: the Stones, The Beatles, The Who, the Kinks. Chas [Chandler, Hendrix’s manager] had invited everyone. He’d put this thing together. He told me: “I’ve got a jazz drummer and a bass player who’s a guitar player.” And it was quite incredible. Such a superb blend of musicians.

I went to see him at his first show in a club in London called The Bag O’Nails. I was the only person there, apart from the roadies and Chas Chandler [Hendrix’s manager].Obviously he saw me there, and he did this whole show to me. It was magical. I met him a quite a few times, and he always came on to me a bit strong and I couldn’t do anything, I was with Mick. I would’ve have loved to. Actually, quite frankly, if I hadn’t been with Mick I would’ve gone off with him. Jimi is my biggest regret.

I was one of the first people to see him here, when he played a club in Bromley [The Bromel Club, in 1967]. It might have been the first gig he did. There was hardly anyone else there. But he still poured lighter fuel on his guitar and set fire to it that night.

We shared a house in Holland Park – Pat [PP] Arnold’s house – and he gave me a basset hound called Snoopy that used to shit everywhere. Pat said: “Either the dog goes or you two go”. So Jimi said: “Why don’t I go and you keep my dog? I’ve got to move on anyway”. He was quite quiet as a flatmate: Quaaluded-up all the time. And spliffed. Very laid back. He’d just sit back and play right-handed or left-handed guitar – that ambidextrousness blew my mind. If I try to play left-handed it’s like giving a child a guitar.

We used to get out the acoustics and swap blues licks, sometimes for him to warm-up before a show. He always said: “I don’t like my voice”. And I’d say: “Don’t worry, your guitar playing takes care of that.” He was a very sweet man. I remember him walking out of Ronnie Scott’s on the night he died. He had his arm around a girl and I shouted after him: “Oi, Jimi, say goodnight!” I was in tears when I found out the next day. I couldn’t believe it