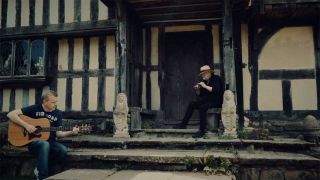 Rob Reed and Les Penning have premiered their new video for their cover of The Floral Dance with Prog. You can watch the full period video, directed by Reed, below.

It's taken from the duo's new five-track EP, The Floral Dance, which is released on August 5, and also features a reworked version of Wrekorder Wrondo, originally recorded by Les back in 1978 with Mike Oldfield.

“One day, over a pot of tea, Les said wouldn’t it be great to shoot a video on an old fashioned steam train," Reed tells Prog. "I went searching and happen to find the perfect location here in South Wales (Blaenavon to be specific). After explaining our reasons for wanting to film there to the operations manager and also Les’ association with Mike Oldfield he agreed. Everyone was extremely accommodating and we were granted full access to the train, staff and station.

"I’ve always loved film making but prefer the directing and editing aspects as opposed to being on-camera. I try to ensure all my videos have high production values and feel like mini films. It’s something I’m planning to expand upon for an up-coming project".

“Each of our videos seems to be getting more and more elaborate," adds Penning. "I’m amazed that we set ourselves what seem like unachievable targets, steam trains and rowing boats etc., but Rob always seems to make them happen. Though the less I ask ‘how?’ the better. It was a lot of fun though and the result was fantastic."

Watch hard for a cameo performance from Reed as the train driver! The Floral Dance EP will be released on August 5th and is available to pre order from the Robert Reed shop.