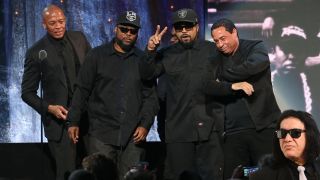 If the old adage that all publicity is good publicity is correct, then the faceless men behind the Rock n’ Roll Hall of Fame must be delighted that yet again their institution is making news headlines.

Not a year goes by without some media-driven ‘controversy’ surrounding the induction process, and 2016 proved to be no exception. Leaving aside Lars Ulrich’s entirely warranted jab at the organisation over Deep Purple’s long-overdue acceptance into the honour roll, last week’s ceremony re-ignited the debate over hip-hop’s inclusion in the Hall of Fame, with N.W.A.’s Ice Cube and MC Ren addressing the issue onstage in Cleveland. Referencing comments made by Gene Simmons in 2014, where the Kiss bassist questioned the legitimacy of rap artists such as Grandmaster Flash and Run DMC being inducted, and stated that he was “looking forward to the death of rap”, Ren told the assembled audience “I want to say to Mr Gene Simmons that hip-hop is here forever. We’re supposed to be here.” Ren’s bandmate Ice Cube, meanwhile, laid out his take on the issue in eloquent terms.

Naturally, Simmons being Simmons, the Kiss man felt the need to have the last word.

“Respectfully– let me know when @JimiHendrix gets into the hip hop hall of fame,” he tweeted. “Then youll have a point. @icecube.”

Even given Simmons’ long-standing reputation as one of rock music’s most puckish shit-stirrers (and brazen self-publicists) his stance here – basically summed up by his 2014 quote “If you don’t play guitar and you don’t write your own songs, you don’t belong [in the Hall of Fame]” – seems terribly old-fashioned and narrow-minded, particularly when set against Ice Cube’s inarguable, and wonderfully articulate, statement. While unquestionably there’ll always be an element among rock fans who like their music white, middle-aged, fusty and conservative – those blind to or wilfully ignorant of the contributions made to the genre’s development made by Little Richard, Chuck Berry, Sister Rosetta Tharpe or Bo Diddley, for instance – only the most emotionally numb could deny that N.W.A.’s Fuck Tha Police or Public Enemy’s Fight The Power deliver exactly the same visceral thrill that one might get from hearing Anarchy In The UK or Smells Like Teen Spirit or Highway To Hell or perhaps I Want To Hold Your Hand (in Simmons’ case) for the very first time, that irresistible rush of endorphins that the finest rock ‘n’ roll delivers. Most people understand the term rock ‘n’ roll to be an adjective as well as a noun – a mind-set, a code of living, an attitude.

There’s a reason one considers Guns N’ Roses or AC/DC to be rock ‘n’ roll bands where, say Maroon 5 or Mumford and Sons are not, regardless of the fact that all four groups write their own songs and play guitars. Speaking to The Quietus website last year, while selecting his favourite albums, Simmons discussed the art of making music, using a cooking analogy, saying “Everybody uses salt, everybody uses vegetables, there is nothing unique, but how you mix up those elements makes it yours or not…Everybody cooks, but few people are cooks.” Using the same logic, can one really argue that NWA or Public Enemy or Run DMC are not worthy rock ‘n’ roll artists, regardless of the ingredients they selected for their unique musical menu? There’s a commonality in this music that surely transcends genre and form.

It would be ridiculous to argue that hip-hop has not had an incalculable influence upon rock music, from Blondie namechecking Fab Five Freddy and Grandmaster Flash on Rapture, through NWA and Public Enemy’s influence on Rage Against The Machine and the entire nu-metal genre through to the legions of modern rock bands taking inspiration from the likes of Eminem, Kanye West and Kendrick Lamar. Few musical artists embodied the spirit of rock ‘n’ roll better than Lemmy, and is Motörhead’s Born To Raise Hell any less ‘rock ‘n’ roll’ for the participation of Ice-T? Of course not.

There is, one might conceivably argue, a certain irony in a website called TeamRock arguing for the all-inclusive nature of rock ‘n’ roll: where, one might argue, are the TeamRock articles on Kendrick Lamar, Run The Jewels, Ghostface Killah or MF Doom? But while TR is undoubtedly a specialist music site, we and our sister sites, have never been afraid to step outside genre boxes to recognise artists who embody the rock ‘n’ roll attitude, whether that be Bill Hicks, Savages, Chuck D or Don Letts. Getting back to the central point though, we’re going to leave the final word – for now – to Ice Cube.

“Everybody’s got their own opinion and Gene, he’s an OG in the game,” the rapper told Howard Stern on Tuesday, “but he’s just wrong on this.”

What are your thoughts? Let us know below…