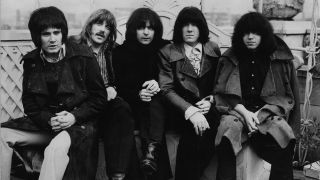 Original Deep Purple bassist and co-founder Nick Simper says he finds it strange that he wasn’t included in the band’s lineup to be inducted into the Rock And Roll Hall Of Fame.

Simper tells TeamRock’s Malcolm Dome: “The first I knew about the Hall Of Fame induction was when I read about it and fans were complaining that I wasn’t being inducted.

“Maybe I am being naive, but I always thought that if a band gets into the Hall Of Fame then all members, past and present, are part of it. Obviously not.

“Yes, it is a little strange that I am only only one from Marks I, II and III being left out, but I shan’t lose any sleep over this. It’s not as if I need to be given this award to know what we did in Deep Purple made an impact. And I’m sure it wasn’t a decision that came from the band.”

Simper says there’s no bad blood between him and the other members, and adds: “I was in regular contact with Jon Lord before he died, and Ian Paice is always sending his best wishes through mutual friends like Bernie Marsden. And I have also toured with Don Airey, with whom I get on well.”

In 2014, Simper told TeamRock being replaced in the band was a “body blow” and that lineup changes had “diluted” Deep Purple’s sound.

Last month, Deep Purple frontman Gillan slammed the Rock And Roll Hall Of Fame’s decision for not including current members Airey and Steve Morse. They’ll hit the studio this month to record the follow-up to Now What.