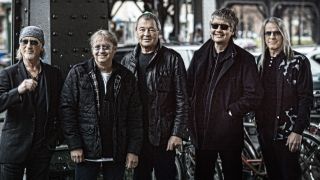 Deep Purple frontman Ian Gillan has slammed the Rock And Roll Hall Of Fame’s decision to leave current members Steve Morse and Don Airey out of the band’s induction.

But they’re not included in the list of members to be honoured by the Rock Hall, who have named Gillan, Blackmore, Lord, Roger Glover, Ian Paice, David Coverdale, Glenn Hughes and Rod Evans.

Gillan says in a blog: “The induction is not – in clear fact – for Deep Purple. It is an arbitrary selection of past members which excludes Steve and Don, both of whom have been with the living, breathing Deep Purple for a very long time.

“Obviously this is very silly. My response is quite simple: ‘Thank you very much.’”

He adds: “What a coincidence… this morning I got an invitation to a wedding from some dear old friends. My family was not invited and they said that I would be required to sit next to my ex. They were shocked when I called to thank them, and declined the invitation.”

Purple were named last week among the inductees for 2016, alongside Cheap Trick, Chicago, Steve Miller and NWA.