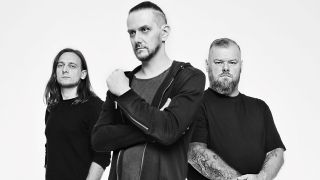 It was the band’s first release since the death in 2016 of founding member and guitarist Piotr Grudziński and was the follow-up to 2015’s Love, Fear And The Time Machine.

Now the Polish outfit have revealed that on November 29, they’ll release a special edition of the record on 2CD/DVD.

The package will include a hi-res stereo and surround sound mix of Wasteland, while the DVD will contain a hi-res stereo 24-bit version, along with a 4.1 surround mix, plus the videos for Lament, River Down Below and Wasteland.

The second CD will contain five previously unreleased acoustic tracks: Vale Of Tears, Out Of Myself, 02 Panic Room, River Down Below and Wasteland.

Riverside say in a statement: “And so we've been talked into this yet again! It's our second encounter, after Love, Fear And The Time Machine, with the surround sound.

“We're hoping that revisiting this release in a different dimension will bring you a lot of joy and positive feelings, especially that we're still touring with this material.

“As a bonus, we have prepared a few acoustic tracks in quite surprising arrangements. We're hoping it will be an interesting experience.”

Riverside have a handful of dates remaining on their European tour, with their next show set for tomorrow night (September 24) in Mainz, Germany. They're joined on the tour by special guests Iamthemorning.

Videos
Lament
River Down Below
Wasteland