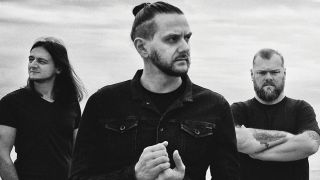 Like Robert Johnson waiting to make a deal with the devil, Riverside stand at a crossroads. To describe 2016 as a tumultuous year for the band seems to be the grossest of understatements. In February, guitarist Piotr Grudzinski died suddenly of a heart attack, casting the whole future of the group into doubt.

In September they won the Prog Award for Anthem of the Year with Towards The Blue Horizon from 2015’s Love, Fear And The Time Machine and they’ve just released Eye Of The Soundscape, a collection of cuts from the vaults and four new tracks showcasing their ambient, instrumental side. Bassist and frontman Mariusz Duda says the band had always wanted to spotlight their electronic influences, but they didn’t have enough material to fill a whole album until now.

“You can see our music from a different perspective,” he says. “Thanks to this we will not be just a prog metal band any more.”

The seeds for Eye Of The Soundscape were planted in 2007 when the band cut a bonus disc to accompany the special edition of their third album, Rapid Eye Movement.

“We went in the studio, the three of us mostly because we didn’t want to have all this messing with the drums and microphones again – only the guitar player, the keyboards player and the bass player,” says Duda. “We decided, let’s just improvise, let’s do something without writing and we will see what happens.”

The result was the 12-minute epic Rapid Eye Movement. “That was the first time we released an instrumental track which was not only connected with all these progressive things but it was more like Tangerine Dream or ambient stuff, all these things I grew up with, connected with Jean-Michel Jarre and Vangelis,” says Duda.

Thereafter, whenever the band had the chance to make a bonus disc, Duda, Grudzinski and keys player Michał Łapaj set to work crafting new instrumentals – leaving drummer Piotr Kozieradzki looking in from outside like the pauper in a Dickens novel.

“If it comes to electronic music, we have to have loops, so I was responsible for all the drum programming. Our drummer was okay with this; he also enjoys this kind of music,” says Duda. “Riverside’s music on the regular albums was always connected with a specific structure, but on the bonus sides we could go with the flow in a different way and start something from nothing.”

Although Duda has always been the main songwriter in the band, he is quick to point out that, “There is no tyranny in Riverside. I’ve got a rule – I compose the songs in front of the guys. Of course I have the songs that I compose at home and later bring the idea to the guys, but mostly I try to do everything in our rehearsal room when we are together because the interaction is really important. Let’s say I was more like a director than composer and I came up with the idea, with the riff, with the mood and went, ‘Okay, just add something. Okay, this is good, let’s go again.’

“When we did Eye Of The Soundscape and we did all these instrumentals, I just let go. There’s a track where I don’t play, the title track. I had an idea: ‘Okay guys, maybe we can create this kind of mood, these kinds of colours, later we could have the Hammond organ only, you can play whatever you want to, and at the end we could add more guitar, blah blah blah,’ so I was more like a director and Piotr and Michał just played.”

The passing of Grudzinski was a huge shock to Riverside and just one of many upheavals in Duda’s life in 2016. “I had my own personal tragedy because my father passed away in May, plus I got divorced so this year was not perfect,” he says. “Now I can say that we decided to carry on as a trio. We don’t want to have a casting for another guitar player. We will use our friends for shows, maybe for the studio, and I think for now, for the next year or maybe longer, that will be the best solution.

“We will stay as a family and we will carry on. This is our decision now. Riverside is definitely going to survive but we know that it will be a brand new beginning for us.”

Given that Duda has always explored the gloomier sides of life in both Riverside and his side project Lunatic Soul, fans might expect the next release to be Duda’s darkest yet. But that might not be the case. “Now I’m working on my solo project again,” Duda says, “Lunatic Soul is connected with death and this year I decided to do an album about how to deal with it when someone important to you dies. I need to move on and I’m not sure if all this tragic stuff will ever be in my music again.”

The songwriter believes that the more adversity you face, the thicker your skin becomes. “I’m sure that the music won’t be about a beautiful life where the sun is shining and flowers are everywhere because this is not me,” he says firmly. “With Riverside we will go back to a little bit of the heavier stuff but not because life is so dark, no. It will be more because we feel more self-confident. If we survive, and we will do everything to survive, our music will be more self-confident. Going back to heavy stuff doesn’t mean that I want to go back to the dark stuff.”

It’s surprising to hear a musician with two gold albums in his home country talk about gaining self-confidence after so many years of critical and commercial success. “Now I feel it’s just like someone who failed and started to be reborn,” he says. “When you’re reborn, when you have a second chance in your life, you feel more self-confident because you know what can happen. You’re prepared, your skin is thicker and you have more strength. I think that our music will be mostly connected with this subject, that you have more strength in spite of everything. You should do everything to survive, not give up, not start to cry about how you failed, how you had terrible things in your life. No, you should move on. We should focus more on this positive side than digging into all this bad stuff that happened in our past.”

In February, Riverside will perform their first show without Grudzinski on the anniversary on his death. “This show will be dedicated to Piotr,” says Duda. “We will see how it will be with different people on stage, and it will be a test for us and for the audience because we know that for many people Riverside without Piotr Grudzinski doesn’t exist any more. We will stay as a trio so we will choose the Genesis path. I think I’m going to release Lunatic Soul in April and after that maybe we’ll tour – it would be great to go back on tour. Everything depends on the show in February.”

For Duda, whatever life may throw at him, music remains the best way for him to express his feelings. “In music I can’t pretend,” he says.

As an asthma sufferer, he compares making music to putting on an oxygen mask and taking some deep breaths. “This is not a catharsis. It’s struggling with the things I need to deal with,” he says. “It’s not like I play music because I really like Pink Floyd so I would like to play like them. I just feel that I need to create music because I think I’ve got something to say. Of course I didn’t say anything important yet. Everything that I do now is like preparation for something bigger. I don’t feel like I already did something I should be proud of. Okay, I’m proud and it’s really nice when I have the Prog Award for Towards The Blue Horizon, but I think I can still achieve something where I can say, ‘Okay, this is it.’ I’m not talking about popularity; I’m talking about the quality of my expression.

“One day I would like to hear my own music and say, ‘Okay, now I’m perfectly honest with myself.’ Besides, I do this for a living so it’s really cool, but that’s the beauty of life. That’s maybe why I’ve changed a little bit and I don’t want to play only dark and melancholic stuff any more. I would also like to be in the light.

“Now I’ve got a different family and totally different experiences, I’m responsible for someone now, so I grew up and became much more mature. All these things that have happened this year made me a man and not
a boy who’s just reading books and playing with his toys all the time. I think I’m on my way to do something that matters.”

Eye Of The Soundscape is out now on InsideOut. See Riverside’s website for more information.