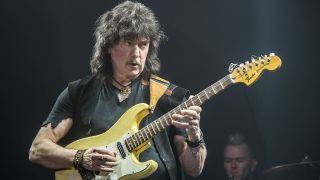 Ritchie Blackmore has confirmed that his 21st-century lineup of Rainbow will tour the UK in June next year.

The four shows follow a handful of experimental appearances earlier this year, when the veteran Deep Purple guitarist decided to try out a return to rock after many years working with his Renaissance-themed band Blackmore’s Night.

He’d originally described the shows as “just a few dates for fun” – but afterwards he said: “We might do a few more shows again. I enjoyed it, especially the last one in England.

“The first two were a little bit intense because we hadn’t played together – but the last one in Birmingham seemed to work to me.

“It was so weird, I think it was 20,000 people – it sold out in 15 minutes and I kind of wondered who they thought was playing. When I got to the auditorium, it was so vast that I thought, ‘Maybe someone else is playing this show tonight.’”

Promoters say: “The Ritchie Blackmore Rainbow tour promises to be an unmissable event, not only for Deep Purple and Rainbow fans, but also those who want to soak up the electrifying genius of the legendary guitarist live.

Tickets go on sale at 10am on December 8 (Thursday), with passes for the Birmingham gig available via TeamRock Tickets.