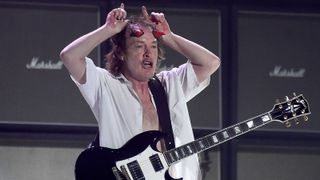 It might seem strange, in an age when the President of the United States can make smart, knowing references to heavy metal, but once upon a time people were genuinely scared of rock ‘n’ roll. Sure there’s still the occasional flurry of tabloid-generated hysteria – remember when the Daily Mail ‘outed’ My Chemical Romance as a “death cult”? – but with the passing of time rock ‘n’ roll has become sufficiently house-trained that transgressive artists formerly denounced as deviants, junkies and perverts are now lauded as iconoclastic cultural giants/geniuses when they leave us.

It was not always so. Back in the 1980s, rock ‘n’ roll was viewed as a dangerous, diabolical art-form, a vile, depraved sinkhole of sin and immorality from which innocent teenagers must be protected. In 1985 a group of politicians’ wives in Washington DC were so concerned about the pernicious effects of heavy metal, hip-hop and pop that they formed the PMRC (Parents Music Resource Center) to lobby for the introduction of ‘Parental Advisory’ stickers on albums containing lyrical references to sex, drugs and violence. For some on the Christian Right however, such measures were not sufficient: rock ‘n’ roll was intrinsically evil and must be stopped at all costs.

In 1983, Jacob Aranza, a young Texan minister of the church, took it upon himself to alert parents to the dangers of rock ‘n’ roll by exposing not only the overt sinful behaviour practised by its leading exponents but also to lay bare sinister Satanic messages secreted within the grooves of popular vinyl records. In his book Backward Masking Unmasked, Aranza noted that many of these messages “are tied in closely with witchcraft and Satan worship and encourage abnormal sexual behaviour and the use of drugs.” Yikes! With the book now long out of print, we feel it is our moral duty to once again shine a light on Aranza’s findings, so that susceptible young minds may be kept pure. Here’s some things we learned while poring over this litany of wickedness…

LED ZEPPELIN LOVE – AND ACTUALLY LIVE WITH - SATAN
“Crowned by a popular rock magazine as ‘the most popular band in the world’, Led Zeppelin is known for swinging concerts tours as well as their music,” notes Jacob. Groovy, right? WRONG! For buried deep, indeed backwards, within Stairway To Heaven, arguably the quartet’s finest song is the message “There’s no escaping it. It’s my sweet Satan. The one will be the path who makes me sad; whose power is Satan.” Blimey. But wait, there’s more! Reverse the lyric ‘Dear lady can you hear the wind blow and did you know your stairway lies on the whispering wind’ and the line “Oh, I will sing, because I live with Satan” is clearly audible. Alarming, by any measure.

BLACK SABBATH HAVE SATAN PLAYING BASS!
“With a name like Black Sabbath you could only expect them to be what they are,” Jacob concedes. The minister uncovers no direct evidence of backwards masking in Sabbath songs, but does draw his readers attention to the fact that the first Black Sabbath album “pictured a witch on the front” while Sabbath Bloody Sabbath features “a nude satanic ritual.” Rum stuff, certainly. But not as alarming as Jacob’s revelation that bassist Geezer Butler, the seventh son of a seventh son, “is Lucifer.” Bet he keeps that quiet down the Villa.

QUEEN ARE BASICALLY DEVIANTS
Queen may not actively promote Satanism, but, worryingly for Jacob, they appear to be flagrantly endorsing ‘alternative’ lifestyles. Played backwards, the chorus of Another One Bites The Dust is plainly revealed to say ‘Decide to smoke marijuana, marijuana, marijuana.’ Furthermore, not only did Queen choose to sponsor a “nude bicycle race” while promoting 1978’s Jazz album, but their hit single We Are The Champions “has been widely interpreted as the anthem of the Gay Liberation.” Freddie Mercury, Jacob also reveals, is a “friend of tightsmakers.” Best we leave it at that.

RITCHIE BLACKMORE DERIVES HIS POWER FROM A DEMONIC SERVANT OF THE BABYLONIAN GOD BAAL
“Ritchie Blackmore’s music and message are certainly not that of a rainbow, but rather a ‘Lake of Fire’.” He may be a guitar god, but Deep Purple/Rainbow man Ritchie Blackmore’s interest in the occult is a concern for Jacob, not least because of the revelation that during live gigs Blackmore “astro-projects out of his body to float around the concert hall.” Revealing that Blackmore likes to record in a haunted 17th century castle, and citing songs such as A Black Magician, Stargazer and Tarot Woman as problematic, Jacob notes that even Blackmore himself has cautioned against occult dabblings, saying “A lot of people go to far, too soon…” Ominous.

KISS ARE FREAKS…AND POSSIBLY CANNIBALS
No need for backwards messages here, as Kiss – “fire breathing demons from rock and rock hell” - openly and unashamedly profess to be ‘Kids In Satan’s Service’, says the good minister. Noting producer Bob Ezrin’s description of the quartet as “symbols of unfettered evil”, Jacob lists their many, many vices, including – but almost certainly not limited to - an obsession with sex and pornography, a desire to become revered as Gods and a propensity for making ‘satanic salutes’ with their hands. Bassist Gene Simmons is singled out for special mention, because of an interview he gave where he confessed to an interest in the taste of human flesh and admitted “I’ve always wanted to be a cannibal.” Sweet Jesus!

IRON MAIDEN ‘RESPECT THE POWER OF THE OCCULT’
“Maiden is far from a band of devil worshippers” an unnamed band member is quoted as saying, but Jacob remains somewhat sceptical. For one thing, the London band have a “rotting corpse” as a mascot, and bandleader Steve Harris sounds as if he’s protesting too much when he says “we don’t go around casting spells.” Hmmm…

ALICE COOPER IS A REINCARNATED 17TH CENTURY WITCH
Son of a preacherman Vincent Furnier received his stage name during a session with a Ouija board, during which he was promised global fame by the spirits present if he glorified the exploits of Ms Alice Cooper, a 17th century witch. With an unhealthy interest in necrophilia and a penchant for dressing like a lady, Alice is most definitely on Jacob’s shitlist. “All these hellish and sexual overtones that Alice uses don’t make it very hard to believe that he is going to Hell and leading many there along with him,” says the minister. Quite.

AC/DC ARE, WITHOUT QUESTION, ON THE ‘HIGHWAY TO HELL’
“The titles of their songs leave the listener with no questions about AC/DC’s moral stand,” sniffs Jacob, citing an interview in which guitarist Angus Young, perhaps not entirely seriously, lists “mugging, raping, pillaging” among his interests. Again, the minister fails to unearth any specific backwards messages in ‘DC’s back catalogue, though points out that “AC/DC means bisexual”, notes that former singer Bon Scott died “choking on his own vomit” and suggests that the ‘Promised Land’ referred to in Highway To Hell is, in fact, most likely to be the domain over which the Horned Master Satan presides. Diabolical!

If you, like us, are concerned about the dangerous messages promoted by rock ‘n’ roll groups, we urge you to pick up a copy of Backwards Masking Unmasked asap. Used copies are available on Amazon for the princely sum of 1p (plus P&P)