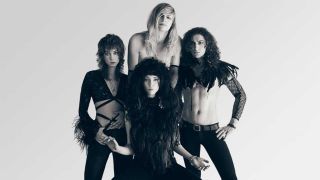 Atlanta's Starbenders have released two versions of their latest single, Cover Me. The first is taken from their second album Love Potions, while the first is a new, acoustic version.

"Cover Me is about love’s underground," says singer Kimi Shelter. "The video gives you a peek into the love that we have for each other within our band. The treacherous oceans of reality have always tested the strength of our bonds, but now more than ever we’ve had to trust one another to get through the storm. We don’t go at it alone."

The release follows in the glitter-dusted footsteps of Somethin' Ain't Right, which was released two weeks ago and marked the precise spot where rock'n'roll meets banana seat bicycles.

Cover Me is no less sensational, duly described by the band's earthly representatives as a "unique combination of ethereal fragility, magnetic rock'n'roll swagger, perfectly crafted pop choruses and punk rock fury." And we're not going to argue.

"The sound has captured this sort of restless, relentless side of my spirit," says Shelter. "We got to that very hungry place and, as a writer, my voice started to become more confident, while it became more vulnerable."

Love Potions is out now.