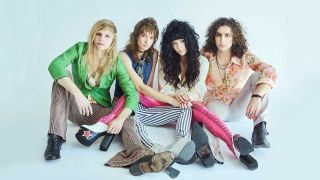 Once in a while, an album comes along that's so perfectly formed, so thrillingly produced – and so stuffed full of melodic sparkle – that you begin to question the apparent suddenness of the band's arrival.

Love Potions, the second album by Atlanta, GA. glam outfit Starbenders – the first, Heavy Petting, was quietly released in 2016 – is just such an album. It crunches. It's smart. It's rammed with the kind of hooks more established bands would kill for. And it's populated by choruses so euphoric they remain lodged in the memory long after the music has faded.

Except that it hasn't, of course. Starbenders have been around since 2014, releasing EPs, touring Japan, and struggling to find the right musicians. And now, clearly, they have.

"Bruce Springsteen has a quote," says Kimi Shelter, the brilliantly-named Starbenders singer and guitarist. "You have to stop screaming your genius into the void and you have to look into the face of the universe and say, 'No! You will listen!' – and this is our hand on the throat of the cosmos."

It's a supremely confident album. Take London, released as a single last year. It starts off with goth atmospherics, Kimi comes in with a voice like Stevie Nicks, the song pauses and then... Liftoff! An arms-in-the-air chorus arrives, instant exhilaration in a tune-shaped pill, before a soaring guitar solo arrives to lift the song further into transcendence.

Then watch the video. Coming on like an outtake from Stranger Things, it's an eerie mix of beauty, androgyny, mystery and science fiction, with Kimi literally defibrillated by the power of that solo.

Suffice to say, Starbenders are the real thing.

"We really just put our all into it," says Kimi. "We wanted to come in old-school with it, and make sure that we were really honouring the ghosts of rock'n'roll past. It was frustrating, but the process really made us. It was both parts: beauty and pain."

Below, Kimi Shelter guides us through 10 songs that inspired Love Potions.

Abba - Knowing Me, Knowing You

"Abba have some of the best arrangements and harmonies, and we really wanted to get very creative with our own arrangements. A lot of times – especially with what we're told works on rock radio nowadays – it's intro-verse-chorus, very cookie cutter arrangements. So we look to bands like Abba to open it up, and this song is such a big production. It's adventurous, and it's huge inspiration for us."

"Bjork's songs always have a magical quality to them. The vocals and instrumentation sit so beautifully with one another, and that's something we really wanted to think about: how to assist the top line, and assist the different little hooks that were going on in a way that didn't let people on to what we were doing.

"I love this song so much because it never stops moving. It's just constant motion. And what's interesting about it is that it's mid-tempo, and I think these tempos are interesting when they feel up-tempo but they're considered mid. This song is like 116 BPM or something. It's interesting to me because you don't always have to go for 170 BPM to blister people.

"The interplay with the top line in the synths is really incredible. It's really cool that Prince did the synthesisers on this song. It's so full, yet none of the parts step on one another. They just keep assisting one another, and they let the song's monster hook really shine through.

"That's something that we as a band really wanted to focus on: how do we let the different parts have their moment, peek out when they need to, and dance around one another.

"Fleetwood Mac are an inspiration for us, too. They're masters of counter melody and interplay between top-line and instrumentation."

"The guitar tones and upfront heavy-hitting drums on songs like this are something we definitely pull from. Dynamics are used really well in this song, and that's something that we as a band are really into incorporating as well.

"It's super hard-hitting songs with pulled-back verses or pulled-back moments in different parts of the song, and then just punching people in the teeth with everything coming back in. That's the kind of stuff that really gets us off."

"This is another great example of dynamics. Songs like this also give the lead guitar a top line voice. We really wanted to bring back guitar in that way on our record, and you look to bands like Guns N' Roses to show us how, because the guitar may be a top-line voice, but it never fucks with Axl and his top line.

"We really look to that kind of stuff because we think it's important for the guitar to be brought back."

"It's just a fucking great song, and all of the little parts are lined up in such a special way that they become hooks of their own. That kind of stuff is just something that we love to do: we we like picking the smallest little thing and stepping down on it or highlighting it in a really interesting way. It just becomes its own hook, and we've left little things like that all through this record.

"Solid songwriting with a killer riff. And that's all you really need: a line that catches you before you hear the song, and a riff that supports it. I think going back to basics is a good lesson for any artist, and going back to basics is also a great inspiration for any artist. As soon as you if you feel like you have writer's block, sometimes all you need to do is just rip everything back and fucking cut straight to the heart."

"I think all those psych rock bands were pulling from that world, like they were sitting around a campfire summoning demons and angels. We definitely looked at this kind of trippyness, and the ethereal side of connecting people throughout the making of the record."

"It's massive and undeniable from all angles: the production, the tones, the command of the vocal. It just comes in from the top, like Pow!, coming out of the gates.

"I do think that there's beauty to foreplay [laughs], and bringing people in, but I also think that it's fun to just punch people in the teeth sometimes. I wasn't around at the time when songs like this were on the radio, but it must have been really cool, and I think that's missing from rock'n'roll: coming in so strong and confident, like that the way The Boss did it."

Peter Murphy - Cuts You Up

"I love this song for many reasons. I think it's cool that it's very goth but it's also pop. I remember being a kid and hearing this song on pop radio. We'd be at a grocery store or something and I'd be like, 'What is that? What is it?' Even my small ears knew that that song was incredible.

"It's become one of my favourite songs of all time. There's just magic to it. And I think that pulling from that world – bringing back the complexity of human emotion to something that could be considered a commercial success – is very cool, and we're definitely trying to run that down."