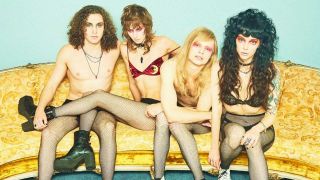 Back in February, Atlanta-based glam rock upstarts Starbenders released an early contender for album of the year in Love Potions, an effervescent, hook-filled blend of pop and rock that raised the bar for bands attempting to borrow from the past while delivering something shiny and exciting and new.

On one hand it's simply good old-fashioned rock'n'roll, with fashionably low-slung guitars, a good measure of androgyny, and enough snarl to keep things interesting. But it's more than that, with the stardust and visual savvy backed up by the kind of songwriting skills that long careers are based on.

Now they've released a video new for Something Ain't Right, which perfectly encapsulates the band's approach. Backboned by the kind of greasy riff Johnny Thunders would have been proud of, it's bolstered by modern production crunch, a chorus more memorable than most, and a video that takes the band-as-gang metaphor into Stranger Things territory. But with more blood.

"Come roll with us on a magickal journey chock-full of banana seat bicycles, electric guitars, blood and rock'n'roll," says singer Kimi Shelter. "We had a ton of fun filming a typical day in the life of Starbenders. May you enjoy it.”

“It’s really interesting to see it bloom into what it is now," says Shelter, talking of Love Potions. "I guess us levelling up as far as musicians go, and having to be capable of pivoting – be decisive and be resourceful in the midst of creating as well – has really shaped us.

"The sound has captured this sort of restless, relentless side of my spirit. We got to that very hungry place and, as a writer, my voice started to become more confident, while it became more vulnerable. As a band, we’ve been doing some big tours in-between the recordings and have been playing live quite a bit. The violence of the stage has shown up in our sound as well.

"We really just put our all into it. We wanted to come in old-school with it, and make sure that we were really honouring the ghosts of rock'n'roll past. It was frustrating, but the process really made us. It was both parts: beauty and pain."

Love Potions is out now on Sumerian Records, with vinyl and CD copies available from Sumerian's US store.