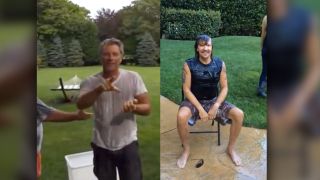 Relations between Jon Bon Jovi and estranged guitarist Richie Sambora could be on the mend thanks to the ALS ice bucket challenge craze.

The pair fell out last year, leading to the guitarist’s absence from Bon Jovi’s world tour. A war of words followed – although Sambora recently said he still hoped for a return to the fold.

That could be on the cards after the frontman undertook the charity stunt then nominated his old friend – who accepted the challenge.

Speaking in his own ice bucket video, Bon Jovi said: “I want you to know I wanted to be the first to rise to the occasion. Now I want to pass this on to David Bryant, Tico Torres and Richie Sambora.”

Sambora responded in his own clip, saying: “I accept the ALS challenge to get whacked by water. I nominate Orianthi and all my friends and fans.”

Foo Fighters mainman Dave Grohl may have trumped the world with his interpretation of the charity escapade – his video spoofed classic horror movie Carrie, then he nominated writer Stephen King and star John Travolta.

The challenge aims to raise attention and funds for victims of amyotrophic lateral sclerosis (ALS), a terminal illness that caused muscles to become stiff and weak.