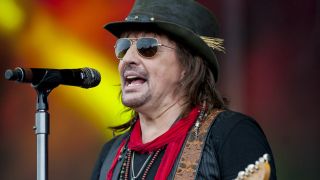 Estranged Bon Jovi guitarist Richie Sambora says he was given a stark ultimatum when he decided he needed some time off – he could tour with the band or leave.

He disappeared from the lineup at short notice last year, giving rise to rumours of a feud between him and mainman Jon Bon Jovi, which seemed to have some credence after both hinted at unhappiness with the other in interviews.

But Sambora, who’s currently touring Europe with his solo outfit, says he has no anger left – and believes it’s still possible he could rejoin the band he helped build.

He tells Lust For Life: “It’s hurt me that more and more untrue things have come out in the media. I just wanted to do something for myself. We had just finished a tour, I had just quit a bad habit, and I was enjoying time with my daughter.

“I saw a year of other priorities ahead of me; I wanted to make my own music and I preferred doing a few shows with my own band. I said I wanted a break.”

But he reports that his request “was just not accepted,” adding: “The Bon Jovi machine had to go on. I could choose – join or leave. That’s hard when you share joys and sorrows for 30 years.”

Sambora believes he made the correct decision, however. “It’s fantastic,” he says of his current situation. “We enjoy every night. I’ve done a lot of wrong things in my life and I’ve regularly made bad decisions. But I think this step was the right one at last.”

He continues: “There’s no bad blood with me any more. I love Jon, and I still see the possibility of a return. There are just a few steps I want to – need to – take.”

And if a reunion doesn’t happen, Sambora will continue in his own direction. “We’re going to record an album; I’d to do a tour after that,” he says. “Not a tour of 14 months in more than 50 countries. Just a nice tour, playing music then being home for a while.”

Sambora returns to Britain for the Calling Festival on June 28 and three solo shows: