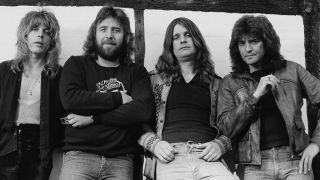 Ozzy and Daisley, right, with the Blizzard Of Ozz band (Image credit: Getty)

Former Ozzy Osbourne collaborator Bob Daisley has denied the suggestion that his latest lawsuit amounts to “harassment” of the Black Sabbath frontman.

Daisley this month launched a claim for $2m in unpaid royalties connected with Ozzy’s first two albums, Blizzard Of Ozz and Diary Of A Madman, recorded in 1980, which featured the bassist’s songwriting and bass playing.

Representatives of the Osbournes responded by saying that previous legal action had failed and that multiple audits of Blizzard Music Limited had resulted in no discoveries of non-payment, adding: “after 36 years, this is tantamount to harassment.”

Daisley has responded that he’d succeeded with legal action on several occasions, until a lawsuit in 1998, when he alleged that Blizzard had been receiving royalties without passing them on.

He tells JoelGausten.com: “The late 90s was when we found out where those royalties were going, so we took action. There are reasons I believe that case was unsuccessful, but they’re too complex to get into now.”

He says his new action is based on performance royalties rather than songwriting royalties. He believes he’s owed money for sales of tracks featuring his bass playing, and that the amounts that have got to him are lower than they should be.

“The Osbournes have been taking 25% rather than the 10% I agreed to,” he says. “It’s been mentioned that this case is about Crazy Train – but there are other songs as well. Mr Crowley, Over The Mountain, Flying High Again.”

Daisley says that tracks recorded by himself and drummer Lee Kerslake were removed from songs in the 1980s in order to avoid paying performance royalties, adding: “It was disgusting. It was such an insult. We were suing them so we expected some backlash. We did not expect the integrity of the music would be compromised.”

He says the Osbournes’ press release “isn’t very accurate,” continuing: “Yes, I have had publishing money from the songwriting over the past 35 years. As far as what I’ve received being in the millions – no, it isn’t.

“I wouldn’t care if I had $50 trillion. If somebody’s taking advantage of me, I want to put a stop to it. I wish Ozzy every success. I just have a problem with not getting paid properly.”

Daisley’s lawsuit was filed on August 9 in the District Court of Douglas County, Nevada. Explaining the delay in commencing proceedings, he says: “The Osbournes were good at hiding what they were doing, and it was only relatively recently that I found out what was happening to me.”