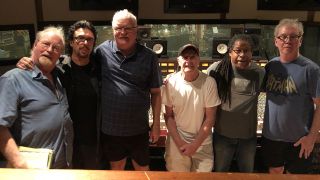 Progressive rock legends Nektar have launched a Kickstarter for a brand new studio album, The Other Side.

Nektar announced a surprise return in 2018, following the death of founder member and longtime band leader Roye Albrighton in 2016. However it seems the band that recorded 2018's Megalomania is no more. The new Nektar line-up features original band members Derek 'Mo' Moore (bass), Ron Howden (drums) and Mike Brockett (special effects). They are joined by Ryche Chlanda, the band's guitrarist from 1978, bassist Randy Dembo from the 2005 incarnation of the band and keyboard player Kendall Scott.

"The music for our new album The Other Side comes from the 1978 era when we were writing in Mo's basement in Chatham, New Jersey," the band tell Prog. "This music was put on pause for the last 40 years and it's now time to release it with new input and fresh ideas. The music is growing exponentially as we continue rehearsing and writing and letting it take us to new heights.

"The reason we are here on Kickstarter is to generate the necessary funds and freedom to do this album in a suitable manner without a record company. We would like to release a CD, a DVD on the 'Making of the New Album', and writing and tweaking of the music. A double-vinyl album, all with excellent artwork by our friend and collaborator, Helmut Wenske, the original artist in the tradition of classic Nektar. After the album is released, in 2020, we will make a Blu-Ray DVD with the light show so you, our fans, can have music and visuals that you can take home with you. We also need to set up touring to bring the music and the visual light show to you throughout 2020. In order to give you, our fans, our unique experience, we need your help now."

The Nektar Kickstarter page can be found here.