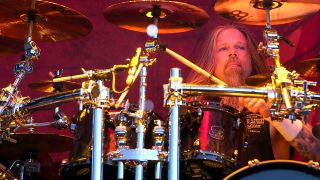 Randy Blythe says he can’t say when Chris Adler is likely to return to the Lamb Of God lineup.

It was announced in July last year that the drummer would be taking a step back from the band, with Art Cruz filling in at his recommendation.

It later emerged that Adler had been in a motorcycle accident which shattered his collarbone and right shoulder and also chipped bones in his hip. As a result, he was undertaking a “rigorous schedule of physical and occupational therapy.”

Asked recently by radio station WSOU if Adler would be back performing soon with Lamb Of God, Blythe replied: “It’s hard to say what’s going to happen with Chris Adler. I have no comment on him.”

Adler reported last summer that he was making steady progress and was playing drums every day to get back to his old self.

He added: “Playing drums is what I do and refuse to do it poorly. I will be back behind the kit ASAP. Thanks again for the love! See you soon, Chris.”

Adler famously played on Megadeth’s 2016 album Dystopia following Shawn Drover’s departure from the band. It later came to light that Dave Mustaine invited him to join the band full-time, but Adler wanted to concentrate on Lamb Of God.

Lamb Of God will return to Europe later this month for a run of summer festival appearances, while guitarist Mark Morton recently said the band were excited about the material they are working on for the follow-up to 2015’s VII: Sturm und Drang.