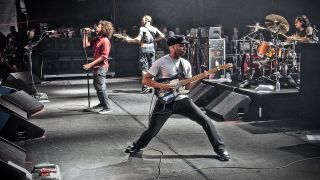 Rage Against The Machine have been confirmed as one of this year’s headliners at Coachella.

The music and arts festival will take place over two weekends: April 10-12 and April 17-19 at Indio’s Empire Polo Club in California.

The news comes after Tom Morello, Brad Wilk and Tim Commerford revealed they were dissolving Prophets Of Rage in November last year and hooking up once again with Zack de la Rocha for five shows – two of which were rumoured to be Coachella appearances.

The other two Coachella headers are Travis Scott and Frank Ocean.

Other artists of note playing both weekends include Thom Yorke, Idles, The Hu, Code Orange, Fontaines DC, King Gizzard And The Lizard Wizard and Anna Calvi.