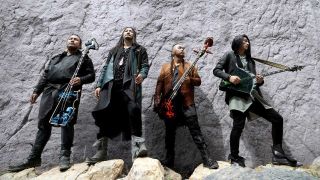 It's Monday night at The Mongolian Embassy, and veteran PR man Alan Edwards is introducing his latest charges.

He's worked with some of the biggest names in entertainment – David Bowie, Led Zeppelin, The Cure, Aerosmith, Bon Jovi and dozens more – and while it's his job to ensure that the assembled media go away more interested in his clients then they were upon arrival, the excitement in the room is undoubtedly genuine.

The cause of all this excitement? A rock band from Mongolia, The Hu.

A year ago ago The Hu weren't on anyone's radar, but two extraordinarily cinematic videos have changed that. Yuve Yuve Yu and Wolf Totem have racked up the kind of numbers on YouTube that demand to be taken seriously, and suddenly they're signed to the same label as Motley Crue and Five Finger Death Punch.

Mongolia has been producing rock bands since rock bands have been around. The first were folk-rockers Soyol Erdene, who were founded in 1971 as a response to the success of The Beatles. They were frequently censored for promoting Western music and fashion, even if their songs bore largely innocent titles like Song Of My Happiness or A Monument To A Frontier Guard.

But there wasn't much that was authentically Mongolian about the music of Soyol Erdene. They didn't play local instruments – most famously, the morin khuur, or horse-head violin – and they didn't use throat singing.

The Hu use both. But that's not what's rocketed them towards stardom. After all, the great Tuvan band Yat-Kha were combining Central Asian music and Western rock more than a decade ago, and while they won a World Music Award from the BBC in 2003, their appeal never broadened much beyond the WOMAD crowd.

Combine that with shamanic rhythms, vocals and instrumentation that sound almost other-worldly to the unfamiliar ear, plus visuals that celebrate the extraordinary Mongolian landscape, and you're left with something truly unique. Something truly spectacular.

The Hu are here. And they're here to stay.

Below, The HU's throat singer and morin khuur player Gala (second from right, above) picks 10 songs that inspired him. The band's debut album, The Gereg, is available to order now.

"The energy it's just amazing, you know? I like the groove, and the way the song moves forward as if they're marching

"And I love the singer's voice. It's a unique way to present music and deliver the message, especially because he's singing in his own language. Most popular songs are sung in English, which is more widely understood, but there's something special about this guy singing in German. Even though I don't understand what he's saying, I feel something."

"Altan Urag were the first Mongolian band who played traditional Mongolian instruments with rock music. They're the pioneers of Mongolian folk-rock.

"When I was a little guy in music school, these guys were in the same school, and I was so fascinated by their music, and by this song is particular. It was used on the soundtrack of Sergei Bodrov's movie Mongol. It's amazing."

Metallica – Nothing Else Matters

"Nothing Else Matters is a melodic song, but it has real power behind it. I love a lot of Metallica's songs, but the way James Hetfield sings this, I actually feel like it relates to my soul."

Slipknot - Before I Forget

"When I was a little kid I was fascinated with Slipknot because of the mysterious nature of the band.

"This band is all about mystery, but with this particular song I really love the energy of the vocal performance. The best part of the song is the chorus, which just drives me nuts!"

"I like Marilyn Manson's music videos. They're something different. They're like artworks. And with Beautiful People I like the music video, but most of all the drums.

"In Mongolian music we have the morin khuur (horse head violin), and the music often replicates the rhythm of a galloping horse, like on Yuve Yuve Yu. And the rhythm of this song is similar."

"The is a pure piece of art, and there's nothing else to say about it."

"I loves this because it has a lot of traditional elements to it. It's a pure, traditional Mongolian piece of art.

"I leaned it from a guy called Batzorig Vaanchig, who is one of the members of Khusugtun, who've played at the Royal Albert Hall [at the Proms Festival in 2011], and when Batzorig taught me I learned a lot."

"'Magtaal' means 'praise'. This is very personal to me. Whenever I perform this I feel like I'm connected to the mountains and to nature.

"The song is about the Altai Mountains in Mongolia, and there's something very special about this piece of art."

System of a Down – Aerials

"I loves this band because the music is different, and I'm always looking for something original and different.

"Because of Serj Tankian's Armenian heritage I get this real vibe from the music, and when the bridge arrives and the heavy guitar comes in it's amazing!"

"I love this band, and this particular song. The drums come in and it's so nice and catchy, and then bass and the chord progression, and when it's combined with Dave Grohl's vocals it's just pure art.

"It's a different style, but there's something special about this song."