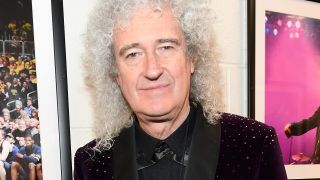 Brian May has thanked fans for a “torrent of love and support” after reporting he recently suffered a heart attack.

The Queen guitarist revealed the news in an Instagram post which came after he was taken to hospital after ripping buttock muscles in a gardening accident.

May said: “I had – in the middle of the whole saga of the painful backside – a small heart attack. I say small, it's not something that did me any harm. It was about 40 minutes of pain in the chest and tightness. It's that feeling in the arms and sweating.”

May now says he’s been “overwhelmed” by the messages of goodwill that he’s received over the past 24 hours.

In a video message on his website, May says: “Can't quite make it to the music room today – the so-called music room. Battling things a bit today but I'm overwhelmed. I’m really more than touched by the torrent of love and support that's come back at me after incredible coverage in the press. I really didn't expect all that.

“As you can see I'm okay but this is going to sound really strange, but my email box and the Save-Me box and everything else are so full of incredible messages. I will never ever be able to thank you all individually, so let me please at least thank you here. It's just unbelievable.

“This is going to sound very strange but I sort of feel like I died and yet I was able to come to the funeral and see all the tributes. I hadn’t thought that at funerals. I don't know if you think that. You know all these people who come and say these wonderful things about the person that's gone, but you can't hear it or she can't hear it, and so I'm lucky I got to hear it so my life is complete.

“I’m sorry that sounds weird but I can't compare it with anything. I just looked at all the publicity that was generated so I'm thrilled and I'm pretty good today. I'm taking it easy and taking all the right things and do the physio and all the rest of it. So I'm going to be fully functional pretty soon.

May had three congested arteries which were in danger of slowing the supply of blood to his heart. He was subsequently fitted with three stents.

Since the lockdown began, May has been busy, joining comedian Matt Lucas to perform the charity single Thank You Baked Potato, and he also hooked up with pop-rockers Kings Daughters to officially launch the recent single Get Up.

He also joined his Queen bandmate Roger Taylor for a lockdown rendition of We Are The Champions with Adam Lambert, with the track later polished up to be released as an official single.

Last week it was revealed that Queen and Howard Blake’s soundtrack to the 1980 sci-fi movie Flash Gordon would appear in a box set celebrating the film’s 40th anniversary.