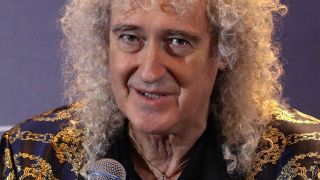 Brian May has revealed that he recently suffered a small heart attack. The diagnosis comes two weeks after the Queen guitarist was taken to hospital after ripping buttock muscles in a gardening accident.

May revealed the news in a post on Instagram, saying, "I told you I had a ripped muscle and that was the way I was diagnosed... but anyway, it turned out to be not really the case."

After the initial diagnosis, with May in enormous pain, he underwent an MRI scan that revealed a compressed sciatic nerve - the result, he says, of, "50 years of running around with a guitar strap over my left shoulder holding a heavy guitar."

"But the rest of the story is a little more bizarre," continues May. "I was shocked, I thought I was a healthy guy. Everyone says I've got a great blood pressure and I keep fit, I bike, good diet.

'I had - in the middle of the whole saga of the painful backside - a small heart attack. I say small, it's not something that did me any harm. It was about 40 minutes of pain in the chest and tightness. It's that feeling in the arms and sweating.

"And you kind of know, you've heard things and you think 'this is a heart attack'. To cut a long story short, my wonderful doctor drove me to the hospital himself and I had an angiogram.

It turned out that May had three congested arteries, which were in danger of slowing the supply of blood to his heart. He was then fitted with three stents (tiny tubes that ensure blocked passageways are kept open).

"I walked out with a heart that's very strong now," adds May. "So I think I'm in good shape for some time to come."

Brian May has been busier than most during lockdown, joining comedian Matt Lucas to perform the charity single Thank You Baked Potato, and hooked up with pop-rocker Kings Daughters on Instagram to officially launch their recent Get Up single.

He also joined his Queen bandmate Roger Taylor for a lockdown rendition of We Are The Champions with Adam Lambert. The track was later polished up to be released asa an official single.

Last week it was revealed that Queen and Howard Blake’s soundtrack to the 1980 sci-fi movie Flash Gordon would appear in a box set celebrating the film’s 40th anniversary.