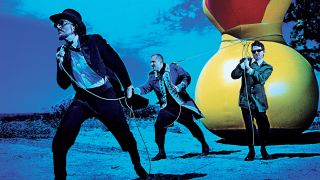 It’s no secret that Les Claypool is something of an enigma with an imagination bigger, weirder and more winding than David Bowie’s Labyrinth. But what drives the Primus mastermind? What does he do when not fanboying over Willy Wonka? We find out!

“As a kid a lot of my friends’ fathers would take them to baseball or football games, but my father would take me fishing – my father, my uncle, my cousins all had boats and we’d be out there trying to catch a salmon or a sturgeon. I guess you write about what you know, and, apart from substance abuse, that’s always been something that permeated my mind. I’m very concerned by what happens to our water, in southern California, Palm Springs, the humidity is such that there are areas that are considered dessert now. I’m always interested in where water goes and who does what with it, and fishing is a huge escape from everything – the smells and the sights and sounds. When I’m there I am just solely concentrating on that and what I’m trying to catch, it’s kind of a different stretch for your mind.”

“I live up in the Sonoma Coastal, you know wine country, and I’ve seen a lot of the apple orchards vanish over the years. When you live in Hollywood a lot of your friends tend to work in the film industry – so my friends are turning up to my barbecue with their own homemade wine – and I figure that I’m spending so much damn money on this Pinot Noir that we should make our own! ‘It’ll be cheaper’ I said, and it’s pretty much the stupidest thing I’ve ever said! I’m gradually wearing down my children’s inheritance with this damn vineyard ha ha, but we make spectacular wine – we were lucky that we got this guy Ross Cobb who is one of the best, if not the best, pinot maker in northern California, and the only reason we got him is because he was a bass player! He was a fan, otherwise I’d never of got him.

“But I’m a rookie, I know northern California Pinot Noir and that’s about it. I know what I like when it hits my palate but I can’t tell you the best Burgundys or Bordeuxs – I’ve found the Pink Floyd of wine and I just listen to the same Pink Floyd records over and over again! Beyond that I’m not very well-versed but I know my Pink Floyd ha ha!

“It’s very subjective, I want to do it for yobs who walk into a restaurant and don’t wanna get screwed – they can go ‘Oh! It’s that Claypool guy!’ and this is damn good wine. You’re looking at around $70 for a bottle and when you go into a restaurant they are going to mark that up, so it isn’t just some cheap knock-off, but it’s fun and approachable and not so stuffy. It’s called Claypool’s Pachyderm after our song Southbound Pachyderm, it used to be Claypool’s Purple Pachyderm, but we changed it to make it a little less unusual.”

“We didn’t even think that thing was going to get on television, let alone become the thing that it has become. Trey and Matt (Parker And Stone, South Park creators) had actually been listening to one of my solo albums when they were putting the pilot together and contacted me to see if I’d do it as a solo thing, but we’d just got a new drummer in Primus so I thought ‘Let’s just do it as Primus’. I think we got paid five grand for that original recording, but we just wanted to be part of it because we thought it was so cool. Now those guys are very good friends of ours and are involved in many things that we do that have been very spectacular, and the bastards just keep one-upping and raising the bar for everyone in terms of how far you can push things – The Book Of Mormon is one of the most brilliant things ever, I’ve seen it four times. You have to see it.

“That film was a huge part of my childhood. I wanted to take on some sort of sacred cow, we thought about doing Magical Mystery Tour and I’m glad we didn’t because The Flaming Lips have been doing St. Pepper’s recently, so I started fooling around with Candyman and getting a few laughs.

“As a band we do these special New Year’s shows, and we decided to do the Wonka show at this New Year’s Eve show – it went surprisingly well, and it just made sense to do it as an album. The whole album is about my perspective of seeing the movie as a kid; I remember seeing a trailer for it, there was the chocolate running down the screen, and I just thought it was amazing. I was immediately sucked into that world. I remember if you collected enough box tops off Cap’n Crunch boxes then you could get a Willy Wonka chocolate making kit, and of course I got it and made chocolate bars for all the kids at school with little Oompa-Loompa’s on them… until Jaws came along and I started drawing sharks all over my work books, that was my film!”

“Larry (Lalonde, Primus guitarist) and I were pretty much stoned during the writing of our first three records, but there are stoners and then there are stoooooooners! Our old drummer Jay Lane was a real stoner, I mean the kind of consumption he could get through was unreal. I’d just pick it up and put it down throughout the day – I’ve never been one for overindulgence, because, well you can see it in my songs, there is a lot of substance abuse in my family. My cousin is in and out of prison all the time with a speed problem and I lost my uncle at fifty. He was a tweaker, he was on speed, so I’ve always known to keep an eye on it and knew that this behaviour was in my DNA… That being said, yes, I did enjoy marijuana and I still do to this day. I have my vaporiser and I like to visit it now and again.”

“So we were in there last time remixing the Wonka album, and one of my technicians comes in and says ‘Hey man, how are you with snakes?’ and there is this rattlesnake right outside the studio. That kind of adds to the vibe when you’re recording around something like that, wrangling the creatures and the elements. But it’s very relaxed, it’s like the house in Boogie Nights with lots of tiles, hardwood and redwood. It was built in 1973 by this doctor who spent a lot of money on building a house in the middle of nowhere and I haven’t changed a thing. People keep asking me when I’m going to remodel it and I’m like ‘You’re kidding! This is like a ‘70s time capsule!’ Seriously it’s like the house from The Brady Bunch mixed with a porno set.”

“I just like Halloween, I like dressing up. I have these characters in our songs and that’s why I throw the pig mask on. For many years I’d write these songs and lyrics and I couldn’t ever get a singer that would sing them in the way that I wanted, so I became the singer by default. I was never comfortable with my singing voice, my voice didn’t really stop changing until I was in my thirties, so I never considered myself a singer, I considered myself a narrator – so when it came to bringing on these different characters, your John The Fisherman or your Tommy The Cat, I would treat it like and acting role. It wasn’t really until the 2000s when I finally felt comfortable with my voice and began to really start playing with people and throw on the pig mask or put on a helmet. With Oyster head I had this helmet with a microphone in it, it’s just easier to step into these characters if you have these accessories to play with. Plus it’s just fun too.”