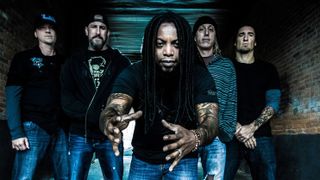 Fans were robbed of the chance to see Sevendust, who were due to headline the final day of Laconiafest

Police in the US state of New Hampshire are looking into claims that a festival organiser left music fans and staff high and dry by skipping town with their money.

Floods of complaints have been made about organisers of this month’s Laconiafest, with bands saying they were asked to pay to be on the bill but not refunded when the last day of the event was cancelled, and workers on the festival site claiming they were not paid for their efforts.

Steven Tyler, Ted Nugent, Bret Michaels and Buckcherry were among the acts who appeared at the nine-day event.

But organisers pulled the plug on the festival at the end of the eighth day, denying fans the chance to see Saturday headliners Sevendust and P.O.D.

Christina Palmer manages Enemy Remains, who were due to perform on the festival’s main stage on the final day. She tells ABC: “I had this piece of paper out, my contract, and I was like ‘Where is the refund?’ There’s no money.

“In the end, me as a manager looking at this festival, everyone that’s a part of this is responsible.”

Laconia Police Chief Chris Adams tells the Laconia Daily Sun that his department is looking into claims by vendors at the event who say they were not paid.

Digital Music News are reporting that only a few hundred people turned up on each of the first eight days of the festival.

California rockers Valor & Vengeance were also due to perform on the final day of Laconiafest and have warned other bands to steer clear of the event’s organisers.