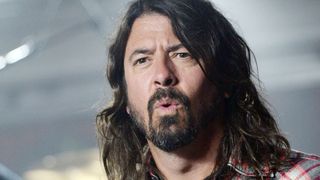 Dave Grohl has recalled how Taylor Swift saved him from embarrassment at a party held by Paul McCartney – when the Foo Fighters mainman was too high to get away with jamming a song.

McCartney had just played a brand-new song on piano, but Grohl can’t play the instrument. And although there were guitars in the room, they were all left-handed, meaning Grohl couldn’t play them either.

He told the story during a solo show at the Cannes Lions Festival of Creativity in France last week.

Grohl said: “Just so you know, Paul McCartney is the baddest motherfucker in the world. He’s not only the coolest, he’s the best.

“He started playing this song and he’s blowing everyone’s mind. A new Paul McCartney song – weird! He finishes, and everyone looks at me, and they’re like, ‘Go on, Dave, play a song!’

“I’m like, ‘I don’t know how to play piano.’ I look around and all the guitars are left-handed. I’m screwed.”

He added: “I’d maybe smoked a little pot – so I was already ‘challenged.’”

He described Swift’s offer to play the piano as “like Batman when you need him,” and then told how he took a left-handed bass from the wall and tried to work out a way to accompany her. “It’s like one of those nightmares where you’re running backwards, always late,” he said.

Then it struck him: “I know this song. What the hell is this? And she was playing Best Of You. As if I weren’t high enough – that blew me into outer space! Taylor Swift, Best Of You, Paul McCartney… I lost my mind.”

The Foo Fighters are currently taking a break after their world tour in support of eighth album Sonic Highways. They released a spoof video in March countering the suggestion that they were about to split up.