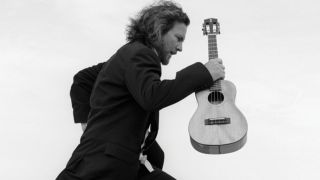 Eddie Vedder has announced an 11-date solo European tour which will take place later this year.

The Pearl Jam frontman will kick off the run of shows with two performances at Amsterdam’s AFAS Live on May 20 and 30, and wrap up with a show at Sicily’s Teatro Antico Di Taormina on June 26.

He’ll be joined on the road by his longtime friend Glen Hansard.

Prior to the European dates, Vedder and his Pearl Jam bandmates will be inducted into The Rock And Roll Hall Of Fame.

Last year, their former drummer Dave Abbruzzese called on the band to “do the right thing” after he was omitted from the initial nomination. Original member Dave Krusen and current man Matt Cameron were the only drummers to be named by the Rock Hall.

Pearl Jam’s induction comes in the first year that they’ve been eligible. The Rock Hall only nominates bands after at least 25 years has passed since the release of their debut album and Pearl Jam’s Ten launched in 1991.

Dissidents: How Pearl Jam's Vs. Album Kicked Back Against The World