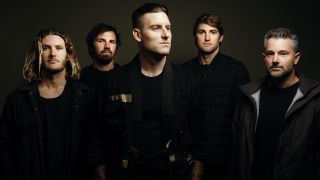 Parkway Drive have announced the rescheduled dates on their Viva The Underdogs European Revolution tour.

The Australian outfit were originally forced to move the spring 2020 dates to November and December due to the coronavirus pandemic, but with restrictions on mass gatherings still in place, Parkway Drive have pushed all shows into 2021.

They’ll play a total of 13 dates, kicking off in Vienna on March 30 and wrapping up in London on April 18. Parkway Drive will be joined by special guests Hatebreed and Crystal Lake.

In May, Parkway Drive frontman Winston McCall revealed the band had been working on new material during lockdown.

He told Rock Sound: “We've started writing which is awesome. It's not something that happens fast for us. Basically, our calendar is messed up. We were going to take a bunch of time off next year to start writing anyway, and now a whole chunk of this year has been wiped out.

“So we've started writing now. I'm not sure that's going to mean anything will be out sooner, but it definitely means we’re active, which is really cool. It’s fun so far, it’s a challenge. It's nice to know that there's a lot of gas in the tank and a lot of fire to go along with it.”

Parkway Drive recently released their documentary Viva The Underdogs which features footage from their headline set at Wacken Open Air 2019.

The film has 11 live tracks from the German festival, along with three studio tracks recorded in German: Würgegriff (Vice Grip), Die Leere (The Void), and Schattenboxen (Shadow Boxing) which features German rapper Casper.