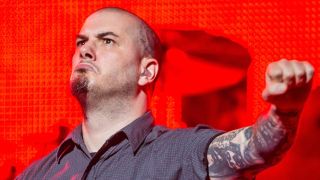 Phil Anselmo says Superjoint is a much healthier place to be since the band all gave up hard drugs.

The frontman admits he remembers little of the the band’s first incarnation – when they were known as Superjoint Ritual before a legal issue forced a name change – and adds that as well as a better atmosphere, the revived group are much slicker musically than they were before.

Asked about the difference between the current era and the first, Anselmo tells Phoenix New Times: “Simply put, sobriety.

“Truth is, and I’m not a bit embarrassed or ashamed to admit it at all, I really don’t remember much about Superjoint from back then except for little pieces. I was fucked up out of my fucking mind on heavy drugs and the overindulgence of booze.

“These days I like my suds and I like a bit of the white grape, but I think very damn well one of us has a much clearer mind. A much more stable support system within that realm.”

He says the band all stopped using heavy drugs ad the same time, adding: “I think there’s this strength with knowledge about what not to do.

“It’s a positive thing. It feels like it’s fun again, and isn’t that the point? If you’re going to make music and you’re having fun while you’re doing it, nothing in this world can detract from that.”

Superjoint play at next month’s third Housecore Horror festival alongside King Diamond, Exodus, Eyehategod and others.

Anselmo says: “I think the lineup really can’t be denied. Look no further than King Diamond coming down to do the Abigail record, and the music he made early on was groundbreaking, and it holds water under my roof. Big King Diamond fan over here – not only as a musician but as a fantastic person.”