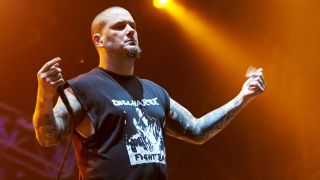 Philip Anselmo has confirmed a reunion of Superjoint Ritual – they’ll play at his Housecore Horror Film Festival in Texas in October.

But they’ll be billed simply as Superjoint due to an unidentified legal issue with their original name.

The announcement comes after he spent years saying it would never happen following their split in 2004, due to a disagreement between the frontman and drummer Joe Fazzio.

Asked in 2011 if a reunion was possible, he said: “Absolutely a hundred percent no fucking way. There’s too many sour feelings, too much bad business. I don’t take steps backwards any more.”

Now Anselmo says: “If people want to hear Superjoint jam a badass set, then we’re all for giving the people what they want.”

The festival, co-owned by the ex-Pantera singer and author Corey Mitchell, takes place at Emo’s in Austin on October 23-36. Also confirmed on the bill are Gwar, Voivod and others.