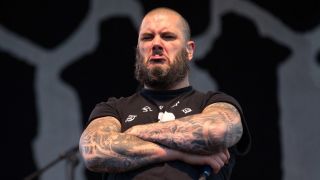 Phil Anselmo has explained why it’s time for Superjoint Ritual to hit the road again.

They’ve confirmed a US tour kicking off on July 10, under the banner Philip H Anselmo’s Superjoint. It follows the band’s live return at last year’s Housecore Horror Film Fest.

Anselmo says: “We’re touring again because we feel like it, it’s fun – and we’re handsome.

“And the big plus here is getting to tour with King Parrot and Child Bite, as they’re handsome fellows as well as live forces to be reckoned with.”

He adds: “Leave your corpse paint at home. No image required for this one – bring a date and some sips, and let the music do the rest.”

The former Pantera frontman had previously insisted there was no likelihood of a reunion, saying in 2011: “There’s too many sour feelings, too much bad business, and I don’t take steps backward any more.”

Superjoint also appear at Hellfest in France in July, while Anselmo recently revealed they’re writing material for an upcoming release.