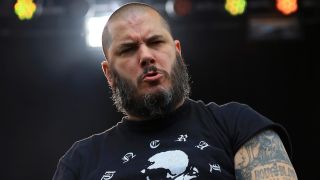 Phil Anselmo believes he and his Down bandmates will get back together at some point in the future.

In February, the vocalist apologised for his “white power” outburst at January’s Dimebash event and urged Pepper Keenan, Jimmy Bower and Patrick Bruders to “move on” without him.

Keenan strongly condemned Anselmo’s actions but said he accepted the apology, later insisting that the band still had a future.

He said: “I wouldn’t throw all the shit we’ve done, beautiful music we’ve done on one stupid moment that was caught on camera, and he apologised for. So we are far from done.”

Now Anselmo thinks the band will reconnect in the future once their current commitments come to an end.

Speaking at the Diamond Pub Concert Hall in Louisville, Kentucky, about the current status of Down, Anselmo says (via Blabbermouth): “We’re all kind of doing our own things but we always come back together because Black Sabbath, Trouble and Saint Vitus bring us back together. That’s where we started from.”

Anselmo faced widespread backlash after his outburst which also forced the band to shelve their summer touring commitments.

The singer’s supergroup Scour will launch a self-titled six-track recording on July 15 and made the opening track Dispatched available to stream in May.

Phil Anselmo: By Demons Be Driven