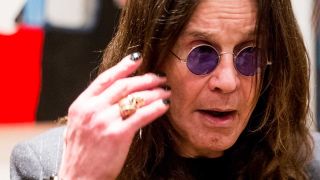 Ozzy Osbourne has been diagnosed with Parkinson's Disease. The singer made the revelation while being interviewed alongside wife and manager Sharon Osbourne on US TV show Good Morning America.

Ozzy said: "I got a numbness down this arm for the surgery, my legs keep going cold. I don't know if that's the Parkinson's or what, you know, but that's the problem.

Sharon Osbourne confirmed that Ozzy is suffering from Stage 2 of Parkinson's, when stiffness and tremors worsen and sufferers may experience symptoms of the disease on both sides of the body.

"There's so many different types of Parkinson's," she said. "It's not a death sentence by any stretch of the imagination, but it does affect certain nerves in your body. And it's like you have a good day, a good day, and then a really bad day."

Ozzy added: "It's been terribly challenging for us all. I did my last show New Year's Eve at The Forum in 2018. Then I had a bad fall. I had to have surgery on my neck, which screwed all my nerves."

Ozzy also reaffirmed his desire to keep working, saying, "Coming from a working class background, I hate to let people down. I hate to not do my job.

"And so when I see my wife going to work, my kids going to work, everybody's trying to be helpful to me, that gets me down because I can't contribute to my family.

"But you know, put it this way: I'm a lot better now than I was last February. I was in a shocking state."

Last week, a trailer for the upcoming Ozzy Osbourne documentary titled Biography: The Nine Lives Of Ozzy was released.

The former Black Sabbath frontman will return to the stage in Atlanta on May 27, while his other live dates can be found on Ozzy's Facebook page.