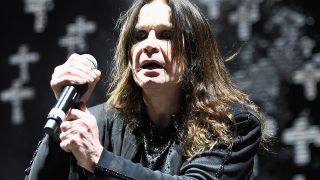 Ozzy Osbourne has called 2019 “one of the most fucked-up years of my life.”

The vocalist was hospitalised earlier this year with pneumonia and, as he was recovering, he fell at home, injuring his back, neck and shoulders – dislodging the metal rods he had inserted following his 2003 ATV accident in the process.

As a result, Ozzy was forced to postpone his entire 2019 touring schedule and push the live shows back to 2020.

Speaking with Billy Morrison on his SiriusXM show Ozzy’s Boneyard, Ozzy says: “It's been one of the most fucked-up years of my life. I broke my neck in January, I had pneumonia, I've had fucking blood clots – I’ve had everything this year.

“It’s been an eventful year, to say the least. I have been in such pain.

"I was doing the farewell tour and it was going great. I was singing better than I have in years and I was really happy. I went home for a short break and I got two staph infections in two of my fingers. God knows how that happened.

“That cleared up. Then I did the New Year's Eve show at the Forum in Los Angeles. That was the last gig I did, because the following February, I went for a bathroom break in the night and lost my footing and I hit the deck like a fucking ton of bricks.”

Ozzy adds: “A few years back, I had a quad bike accident. I'd done some damage there, but they just patched me up. For the last 10 years, I've been getting electric shocks down my right arm.

“So when I fell down just after New Year's Eve, it all caved in.”

Reflecting on what happened immediately after he fell at home, Ozzy says: “I was lying there and I said, ‘Well, you've fucking done it.’ Sharon goes, ‘What are you doing?' It was two in the morning.

Ozzy is continuing to work with occupational therapists to get him back to full fitness in time for his rescheduled No More Tours 2 shows, which will take place across the UK and Europe from the end of January.

Ozzy will release his solo box set See You On The Other Side on November 29 through Sony Legacy. It’ll feature all his solo studio albums along with live records, bonus material and more.