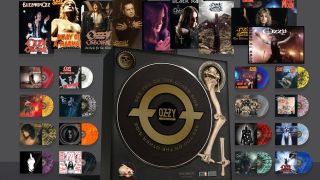 Ozzy Osbourne has revealed that he’ll release a box set featuring his collection of solo material on vinyl later this year.

The 173-song limited edition package is titled See You On The Other Side and it’ll launch on November 29 through Sony Legacy.

It’ll feature all 10 of Ozzy’s solo albums along with the Mr Crowley EP, the Tribute double live album, the Just Say Ozzy EP, Live & Loud and Live At Budokan, while a collection on non-LP tracks titled Flippin’ The B-Side will also be included.

A flexi-disc with a never-before-released demo of See You On The Other Side will also be in the box.

Each disc will be presented on hand-pressed, multi-coloured splatter vinyl, while the box set will come with 10 newly designed 24 x 36 posters, 12 augmented reality experiences – details of which will be revealed in the near future – and each will be signed by Ozzy himself.

Ozzy says: ‘This one's the most elaborate collection so far. It's very well thought-out and well put together. It's got everything in there that you possibly could want and some surprises along the way.

Ozzy guitarist Zakk Wylde has also filmed a video to introduce fans to See You On The Other Side, which also features a couple of appearances from The Prince Of Darkness.