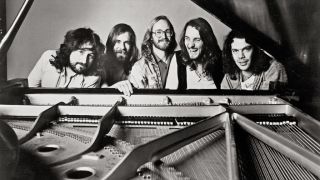 A new book charting the highs and lows of Supertramp's career will be published by Wymer on April 17. The Logical Book - A Supertramp Compendium by Laura Shenton includes a foreword by the group's saxophone player John Helliwell.

The illustrated hardback documents the turbulent partnership between co-vocalists Roger Hodgson and Rick Davies. Also included are highlights such as their first commercial breakthrough in 1974 with Crime Of The Century and the success of Breakfast In America in 1979, as well as the local gigs and demanding tours in between.

As singer Hodgson said of Davies in 1979:  "We’re both oddballs and we’ve never been able to communicate too much on a verbal level. There’s a very deep bond, but it’s definitely mostly on a musical level. When there’s just the two of us playing together, there’s an incredible empathy."

Hodgson is currently on tour and will play six shows in the UK this summer.