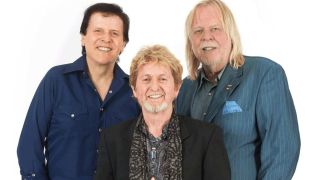 Trevor Rabin says that new music from Yes featuring Jon Anderson, Trevor Rabin, Rick Wakeman is taking longer than expected – but reports it will be “pretty special” once everything is in place.

The band changed their name to add ‘Yes’ to the title in April, with the trio reporting in September 2016 that they were planning on recording together in 2017.

But while there’s been nothing released from the studio yet, Rabin says the delay is only because they have so much material to sift through.

He tells UCR: “I’m always having to apologise for that, because it’s just taking a long time. Not because it’s not going well. It’s almost like when we started rehearsing for the tour.

“We ended up rehearsing stuff and we realised by the end of it that we had so many choices. The show was over three hours. We’re like, ‘Now, we’ve got to cut down pretty significantly on this,’ and we cut down obviously a lot.

“It’s been a little bit like that recording the new music. There’s so many ideas which we’ve catalogued – ‘Oh, we’ve got to utilise that’ and then we’re excited. So, we didn’t finish through on something and we went to the next thing.”

He adds: “We have a ton of categorised pieces which we have together, and it’s just taking a long time to put it all together. But I think it’s going to result in something pretty special if we have the patience to get through it!”

Rabin was one of the former Yes members to be inducted into the Rock And Roll Hall Of Fame earlier this year and he also played live at the ceremony. And he’s full of praise for Rush’s Geddy Lee, who joined the band onstage for Roundabout.

Rabin says: “We had a very, very short rehearsal, but for Jon, Rick and myself, a really enjoyable thing was playing with Geddy Lee. He’s a lovely bass player, and it was interesting hearing his take on Roundabout.

“We’d met before, but I’m not sure if Jon or Rick had met him. He’s just a really nice person as well, which makes it a lot easier. You never know if someone is going to be a complete ego lunatic or not, and he certainly wasn’t.

“He was just the nicest guy and he was great to work with. He was very quiet, but then once he started playing, it was like this animal was released.”

Yes featuring Jon Anderson, Trevor Rabin, Rick Wakeman are currently on tour in the US. Find their remaining live dates below.

Re-Union: Anderson, Rabin and Wakeman on what makes Yes so special