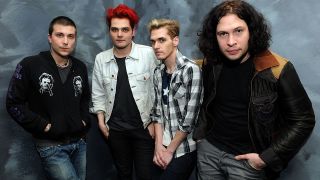 My Chemical Romance have uploaded a short cryptic video to their social media channels which could point to a UK tour announcement.

The 10-second clip shows a series of graphics and symbols – and in the midst of them is a Union Flag. The new post comes a week after the band showed a hooded figure along with the Union Flag emoji on their Twitter account.

Hungry for information about what the new clip might be, fans have discovered that some of the symbols used are from the Theban Alphabet – and they point to the word “June”.

Could this be a UK tour, a one-off show, a UK single exclusive? We’ll just have to wait and see.

My Chemical Romance returned to the stage for the first time in seven years last month, with a 20-song set at the Shrine Exposition Hall in Los Angeles, California.

Their next confirmed show will take place at Download Australia on March 20-21, before they head on to New Zealand on March 25, and end up at Download Japan on March 29.